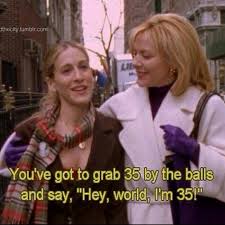 “Everything is always working out for me,” I chant into the mirror while doing my makeup every morning, downing a huge glass of celery juice which I hope will fix all of the problems in my life.  This is a mantra I have adopted from Abraham Hicks, one of the trailblazers of the “Law of Attraction” philosophy, that I use every single time something happens in my life that doesn’t go in my favor or in a different direction than I had planned. Which is, a lot.

And boy, am I a planner. As a severely type A person I am a slave to my daily routines and habits. Which is a good thing I guess. But if we’re being honest, “planner” is just another way of saying “control freak,” which has much more negative connotations. I want and need to always be in control and the idea of not having that sends my entire body into an anxiety spiral. But over the last couple of years I’ve had to find a calming mantra in order to placate the thoughts surrounding the one thing I can’t and never will be able to control: my love life.

I never expected to be single and alone at thirty-five. No woman does I guess, but I thought I would at the very least be living it up in the city, happy, carefree, sleeping with tons of hot dudes and thriving in my career, a la a west coast Carrie Bradshaw. But I’m not really doing that. Most of the time I’m feeling lonely and isolated and absolutely baffled as to how to meet quality men. And speaking of Sex and the City, that show has certainly provided some comfort to women like me who might feel behind their peers who already have houses and husbands and children. But at this point I’ve already matched Carrie’s age by season four. So, not only are the shows’ themes starting to pass me up but I’m getting angrier and angrier with every rerun I watch knowing my life isn’t even close to being as vibrant and exciting as the characters’ are.

Thirty-five is a panic age. It’s the age where women say to themselves, “well shit, I better hurry up and find a mate before I get too old to have kids!” Because if you do the math, and everything goes to plan (which, as we’ve established before when it comes to these things, it never does) your earliest chance of realistically procreating is thirty-seven. Because you have to meet your perfect match, which lets say takes a year, and then you have to date and get to know each other for at least another year (and hoping that in that year you’ll get a ring), which has you marrying at thirty-seven and getting knocked up in that same year. Unrealistic, to be honest. And I’m already halfway through thirty-five so we can go ahead and jack my earliest age up to thirty-eight. And then what happens if we’re reproductively challenged and it takes a while to actually get pregnant? Ugh, I need to stop before my anxiety gets out of control.

There’s that word again: control. It’s probably why I’m single. No one wants to date the control freak! No man in the history of the world has ever said, “oh man, I am so turned on by that girl with the anxious panic behind her eyes!” And I think men generally get squirrely around any woman in her 30s who expresses interest in kids. He suddenly feels too much pressure and expectation and doesn’t know if he is ready for that. Men exist out there who desperately want children too and are worried about being old dads, but they also want that circumstance to be off the table while they get to know you and see if they even want to be locked together with you for a minimum of eighteen years. Because of the time limit put on women’s fertility we can sometimes be blinded to the man and just see a sign with blinking lights over his head that says “sperm donor.”

There isn’t really that much societal pressure put on women to “procreate or be damned to hell” anymore and not having kids sometimes seems like a really sweet deal. My body won’t get ruined, I’ll have all the sleep I want, a double income household, more traveling, the list literally goes on and on. Not to mention it would soothe a lot of the panic, at least concerning timelines. And I honestly never thought I wanted kids. But thirty-five somehow brings about the panic! What if I decide in ten years that I really want them and then it’s too late!? Suddenly the idea of NOT having them made me start rethinking my entire existence. How could I possibly miss out on that phase of life? How could my conceited ass pass up the opportunity to have a mini me around with fifty percent of my likeness and personality that could carry on my legacy?

“Everything is always working out for me,” I chant while meditating, something that would definitely go out the window if I had a screaming baby to take care of. Do I even really want them? I have to fucking figure it out RIGHT NOW honestly because all of my potential suitors in the future will need to know straight up. I will need to know myself because if they’re on the fence too and I get two years in and they give a hard no while I’m thinking hard yes, then that places me at thirty-seven, the age I needed to be at the end of this life plan process!

Every single day that I look into the mirror and see fine lines forming and under-eye circles darkening I am reminded of my time limit concerning motherhood. Women can potentially have children well into their 40s, but the likelihood lessens. Every birthday I have is a reminder that the last train to babytown is coming. And youth is so celebrated, especially in a place like LA where I live, and if a man wants to have children, and lots of them, his first pick isn’t going to be the woman in her late 30s.

Not that I’m even facing that dilemma anyway. Good, quality men who I even want to procreate with are becoming fewer and farther between. And the ones I do find are damaged beyond repair or have sixteen suitcases of baggage that I don’t know if I can unpack. Where is the good, loyal, dad material guy that I deserve? I’ve learned all of the lessons I need to at this point, thank you very much. My last relationship was so toxic it required an exorcism. Why does the universe insist on delaying the connection to my soulmate longer?

My aunt Sue used to be such a legend to me and all of the female cousins in my family because she got married at thirty-six and then went on to have three children, one of which was when she was forty-two. And I have regurgitated her story to everyone, including myself, for years whenever a small hint of the panic would start to creep up. But I can no longer tell that story as any sort of inspiration since I am frighteningly close to passing that goal line.

I always have an understandable excuse that I give to members of my family when they wonder about why I am still free balling life at this mature age. My career aspirations made my love life take a backseat. And while that is noble and commendable, since I am still working at a restaurant to keep my bills paid and a roof over my head, I am not living my dreams to their fullest potential yet. So if my career isn’t in order AND my love life is nonexistent I might as well move back to Indiana to find a nice corn fed divorcee who owns a house and would take care of me so I can just relax and write books and mommy blogs while I walk around barefoot on the screened in front porch waiting for the stew I made for dinner to finish simmering on the stove.

I’m not gonna do that. Also, I can’t cook for shit. But in an alternate reality, and if my family had any say in the matter, that would be a really good move. However, after eleven years in a big bustling city with opportunity and everything I could ever want within a two mile radius I sure as hell am not going to give that up in exchange for the possibility that I might get a kid or two out of the arrangement. I think I’ll take my chances here. I made a deal with the devil eleven years ago. I decided to roll the dice on a risky career choice and now I’m well into my 30s without the success I want yet OR the husband and family. I must’ve rolled snake eyes.

“EVERYTHING IS ALWAYS WORKING OUT FOR ME!” I scream in my head over and over again when I find myself faced with the reality of yet another failed relationship. You were SO CLOSE, I hear echoing in my brain. Who cares if it was the wrong person? I could’ve had the family thing and never had to feel insecurity or panic ever again. I wouldn’t have to be jealous of proposal announcements on Instagram anymore. I could’ve at least had one piece of the adult puzzle put into place. But nah, instead I have to accept that I am thirty-five and single again.

Timelines are bullshit but they are real when you have to factor in biology. Sure I could adopt at forty-five and become a mother that way, and “everything is always working out for me” so if that’s what ends up happening then GREAT. I will celebrate my modern family in whatever form it takes. It’s completely out of my control and I’m just now starting to accept that. Maybe I’m not meant to have children. Maybe I’m not meant to get married until I hit forty and REALLY give up all of the control. Maybe the universe has bigger plans for me and my career is literally weeks away from huge success. I’ll keep repeating my mantra until my face turns blue and hope for the best!